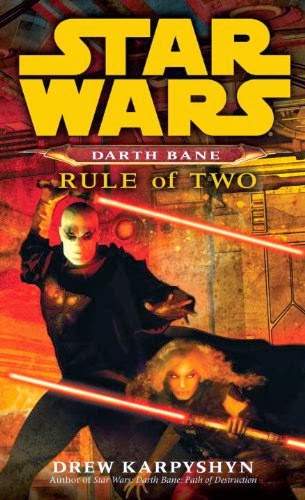 In the New York Times bestseller Darth Bane: Path of Destruction, Drew Karpyshyn painted a gripping portrait of a young man’s journey from innocence to evil. That man was Darth Bane, a twisted genius whose iron will, fierce ambition, and strength in the dark side of the Force made him a natural leader among the Sith–until his radical embrace of an all-but-forgotten wisdom drove him to destroy his own order . . . and create it anew from the ashes. As the last surviving Sith, Darth Bane promulgated a harsh new directive: the Rule of Two.

Two there should be; no more, no less.
One to embody the power, the other to crave it.

Now Darth Bane is ready to put his policy into action, and he thinks he has found the key element that will make his triumph complete: a student to train in the ways of the dark side. Though she is young, Zannah possesses an instinctive link to the dark side that rivals his own. With his guidance, she will become essential in his quest to destroy the Jedi and dominate the galaxy.

But there is one who is determined to stop Darth Bane: Johun Othone, Padawan to Jedi Master Lord Hoth, who died at Bane’s hands in the last great Sith War. Though the rest of the Jedi scoff at him, Joshua’s belief that there are surviving Sith on the loose is unshakeable.

As Johun continues his dogged pursuit of the man who killed his master, Zannah, faced unexpectedly with a figure from her past, begins to question her embrace of the dark side. And Darth Bane is led by Force-induced visions to a moon where he will acquire astonishing new knowledge and power–power that will alter him in ways he could never have imagined. . . .

Overall, a wonderful story with protagonists who are undeniably intriguing. The grammar issues have been mentioned by nearly every reviewer, but I'll add my two worthless cents anyway. Star Wars has a highly demanding, and apparently very rich, fan-base. As such the book publishers churn out books in a ridiculously short amount of time. It's crazy easy to make a typo when writing a book, but when expectations are that high, mistakes in spelling and grammar are devastating to the sense of professionalism about the book. On the other hand, harping on the few mistakes in a brilliantly unfolded story is unusually cruel.

At times Bane seemed painfully overpowered, but the finale was handled well. I look forward to more of Zannah and Bane's exploits and machinations. As it is a sequel, please read Darth Bane: The Path to Destruction first so you have some context. That too is a very worthwhile read.