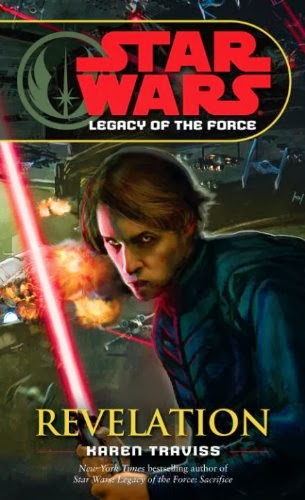 During this savage civil war, all efforts to end Jacen Solo’s tyranny of the Galactic Alliance have failed. Now with Jacen approaching the height of his dark powers, no one–not even the Solos and the Skywalkers–knows if anything can stop the Sith Lord before his plan to save the galaxy ends up destroying it.

Jacen Solo’s shadow of influence has threatened many, especially those closest to him. Jaina Solo is determined to bring her brother in, but in order to track him down, she must first learn unfamiliar skills from a man she finds ruthless, repellent, and dangerous. Meanwhile, Ben Skywalker, still haunted by suspicions that Jacen killed his mother, Mara, decides he must know the truth, even if it costs him his life. And as Luke Skywalker contemplates once unthinkable strategies to dethrone his nephew, the hour of reckoning for those on both sides draws near. The galaxy becomes a battlefield where all must face their true nature and darkest secrets, and live–or die–with the consequences.

Whenever I read a book, I ask myself a question: was I entertained? The answer in this case was yes.
Was it the best book I've ever read? Not really.
Was it a worthy read with some great points that handled Star Wars lore competently? Yes.
Was the ending good, yes.

Fett overload or not, Karen Traviss knows how to write the Mandalorians well. Reading the bit in the back about the next book Invicible, I was struck several times at how utterly awful Troy Denning is at portraying Fett. Perhaps that is a testament more to Karen Traviss' strong characterization than an actual flaw with Denning, but I've a few major nits with Denning's past works - Star Wars meets bugland, 3 books vying for the worst book ever written...)

I digress. Back to Revelation. The title's not that inventive, but I love the sheer anticlimatic bit where the Revelation is an internal, yes "introspective" thing and not a huge explosion, literally or figuratively. The book's title can be applied to several events in the book, and that ambiguity is awesome.

It is definitely a set up of future books, but let's face it, Star Wars sells... so they're going to capitalize on that fact. Part of the lure of Star Wars literature is the fact that it intertwines with past books. The Clone Wars novels were largely pathetic, but there were a few redeemable stories and it helps to know the history to understand this present darkness. Look, it's freaking hard to avoid reusing old material. The fact that the authors have managed to take a good-boy-gone-bad plot point and made it do anything is an accomplishment.

I recommend this book for those who have been following this series, but if you have been, you've probably already bought your copy and read these as a sidekick to avoid your work. So, I'm probably just wasting my breath. In any case, it's a worthwhile read with some nice characterization. Very political, actually, and of course, I wish there was more mention of Tenel Ka and Han, Leia, and Luke, but there's only so much page space, people, show a shred of patience.