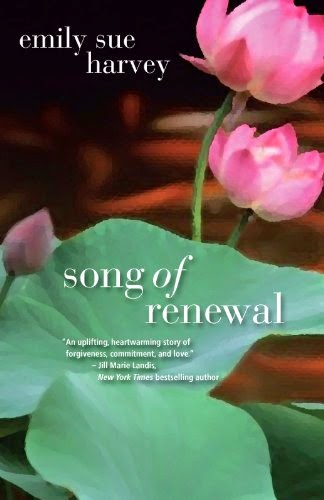 
Song of Renewal received glowing acclaim upon its hardcover release. Now, Emily Sue Harvey has dramatically expanded this extraordinarily touching work to allow us to experience its riches at new levels.

The Wakefields seem to have everything. Garrison is a hugely successful graphic artist. Liza is an active member of the community and a patron of the arts. Their 16-year-old daughter Angel is bright, beautiful, and a gifted dancer. At the same time, though, they have traded away many of their dreams. Garrison gave up a future as an accomplished painter to make money. Liza suspended her own dancing career to raise a family. And Angel is setting aside her ambitions to live her mother’s dream.

When Angel gets into a car accident that kills her first love, the Wakefields’ lives turn on a dime. While Angel lies in a coma from which even the best prognosis is devastating, Garrison and Liza sit by her side, their once-passionate marriage in tatters. As their heartache over Angel builds, Garrison and Liza struggle to rediscover who they once were—and who they were meant to be. They come to realize that it will take everything they have within themselves to heal Angel, heal their hearts, and renew the power of their love.

At once romantic, inspiring, and empowering, Song of Renewal is a rare bauble of a novel, one with something to say to every family.

I laughed out loud at certain passages in this book. Not because the content was funny, but because the author's way of stating things is sometimes just so awkward it comes off humorous. (My favorite example is this: Liza and Garrison lunched with Garrison's Floridian parents, who'd flown in the night before, on hospital cafeteria sandwiches. Ha, I'd like to see one of those flying hospital sandwiches. The comma placement probably makes the sentence technically correct, but the sentence as a whole still comes off strange.)

My mom started reading the book and stopped on pg 50 becuase it was boring her. She said that she felt like there are hundreds of books like this and most of them are better written.

The basic story is okay, but it loses something becuase the back cover copy says pretty much everything that is going to happen. The whole book just feels like a short story somebody bullied into being long enough to call a novel. Go grab it from your library if you want to read it. You'll probably be annoyed if you shell out real money for it.