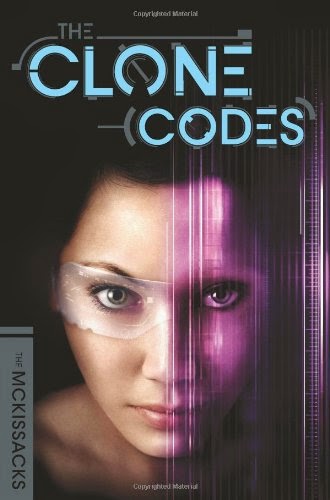 
In the year 2170 an underground abolitionist movement fights for the freedom of cyborgs and clones, who are treated no better than slaves

The Cyborg Wars are over and Earth has peacefully prospered for more than one hundred years. Yet sometimes history must repeat itself until humanity learns from its mistakes. In the year 2170, despite technological and political advances, cyborgs and clones are treated no better than slaves, and an underground abolitionist movement is fighting for freedom. Thirteen-year-old Leanna's entire life is thrown into chaos when The World Federation of Nations discovers her mom is part of the radical Liberty Bell Movement.

I like to complain, so I'll probably complain some about this book, despite giving it 4 stars.

First the good: this book would make a great 7th grade history extra credit book. It's a nice, different look at old ideas with a simple message: the fight for freedom isn't truly over yet. It's ridiculously easy to read and very short. (The ARC I got was 165 pgs and I imagine it's going to be about the same hardcover because it's about trade-paperback size) The concept is undeniably excellent. (A future where clones and cyborgs are the new fringes of society b/c they are only 3/5 human beings.)

Next the bad: I hope the editors pick up on the 5 grammatical errors, 4 are in the first 15 pages :-( There may be more, I'm not an editor, just picky.

Then the funny: I'm not sure why but the book just made me laugh out loud at times. The dialogue was so intensely wooden and ridiculous that I would expect as much from a silly graphic novel. Now graphic novels can definitely be serious but I'm talking about the sort where the main character turns into a bug and begins attacking sort of silly. The foreshadowing is about as subtle as a Times Square Marquee.

Seriously, despite it's flaws, this is a cute little story worth reading. I would technically call it a novella though, not a full novel. Making it a hardcover is kind of a cheap ploy to squeeze more money out of the buyers.