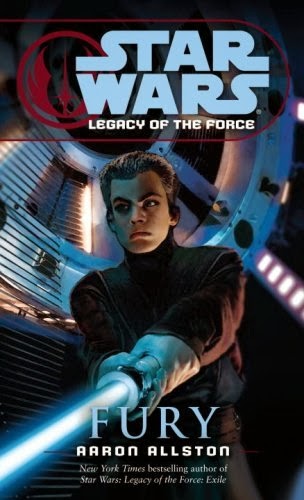 Fighting alongside the Corellian rebels, Han and Leia are locked in a war against their son Jacen, who grows more powerful and more dangerous with each passing day. Nothing can stop Jacen’s determination to bring peace with a glorious Galactic Alliance victory–whatever the price.

While Luke grieves the loss of his beloved wife and deals with his guilt over killing the wrong person in retaliation, Jaina, Jag, and Zekk hunt for the real assassin, unaware that the culprit commands Sith powers that can cloud their minds and misdirect their attacks–and even turn them back on themselves.

As Luke and Ben Skywalker struggle to find their place among the chaos, Jacen, shunned by friends and family, launches an invasion to rescue the only person still loyal to him. But with the battle raging on, and the galaxy growing more turbulent and riotous, there’s no question that it is Jacen who is most wanted: dead or alive.

**Warning, there may be mild spoilers ahead.**
The book is good, no doubts there. The whole business with Allana struck me as a very very tired plotline being used, but I was pleasantly surprised to see that it actually worked. I wish Tenel Ka had a greater role in the story, but with two more books ahead, I can still hope. I shall endeavor to keep my comments related to this book.

Jacen's an idiot, as usual. Homicidal maniac too, but I guess if we wanted to get real technical he's probably suffering from post-traumatic stress disorder. Tired excuses aside, the authors of this series have done a nice job of presenting his unstable mental state.

There's one reason I would give this book 5 stars and it involves killing someone, but I shall refrain from mentioning who as that would be more than a little spoiler. Still I never did like said character and finally having said character offed was emotional bliss. We all know the authors have their pet characters, and this one just hung around for far too long. Annoying as all of everything foul.

Jaina has more than a cameo role, finally. Jag puts up some decent fighting. Han and Leia have their fair share of adventures. There's not much to complain about character-wise or plot-wise, aside from the sheer over-doneness of certain plot "twists".

Four stars for a well-written, humorous book in a series that is slowly improving.