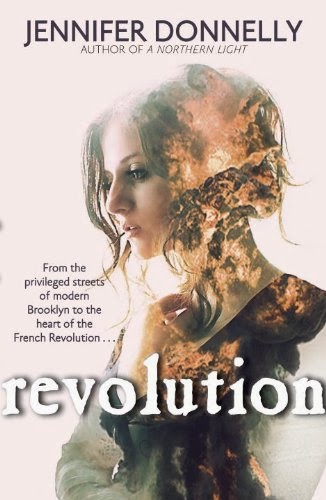 From the privileged streets of modern Brooklyn to the heart of the French Revolution, Jennifer Donnelly, author of the award-winning novel A Northern Light, artfully weaves two girls’ stories into one unforgettable account of life, loss, and enduring love. Revolution spans centuries and vividly depicts the eternal struggles of the human heart.

BROOKLYN: Andi Alpers is on the edge. She’s angry at her father for leaving, angry at her mother for not being able to cope, and heartbroken by the loss of her younger brother, Truman. Rage and grief are destroying her. And she’s about to be expelled from Brooklyn Heights’ most prestigious private school when her father intervenes. Now Andi must accompany him to Paris for winter break.

PARIS: Alexandrine Paradis lived over two centuries ago. She dreamed of making her mark on the Paris stage, but a fateful encounter with a doomed prince of France cast her in a tragic role she didn’t want—and couldn’t escape.

Two girls, two centuries apart. One never knowing the other. But when Andi finds Alexandrine’s diary, she recognizes something in her words and is moved to the point of obsession. There’s comfort and distraction for Andi in the journal’s antique pages—until, on a midnight journey through the catacombs of Paris, Alexandrine’s words transcend paper and time, and the past becomes suddenly, terrifyingly present.

The cover art on this version's prettier than the audio CD I got, but that's besides the point. The story was fantastic. Anybody who's bothered to read my reviews might notice that I don't often say that. It's a long book; 15 hr and 4 minutes for professionals to read start to finish, but it's worth it. Because I had the CD, I must say that the actresses did a truly wonderful job with their performances. Had I read the book myself, I'd probably be giving this a 3 and a half or 4 star review, but the performances were enjoyable.

Was it perfect? No. There were a few times that I wanted to shake the main character and tell her to get on with her life, but hey, that can happen when you talk about anything for 15 hrs.

Was it believable? Not really. Most of it was believable until the whole time travel thing (which is not a spoiler b/c it's on the back cover of the book). Still, it was enjoyable.

I probably only like Andi's character because I like the way the voice actress presented her, but I suppose paper and pen Andi has her strengths. Alexandrine's a cool character; brave, compassionate, etc.

Things to like: There are multiple layers here, yet the switching between Alexandrine's diary entries and Andi's first person narration seemed seamless. Truman's story unfolds in bits and pieces. Tantalizing bits are woven throughout changing your perspective each time you see it, shining light on different sections of a beautiful painting. The music references were nice. I can't relate to that sort of obsession with music, but Andi came through with a genuine passion for the subject.

Parental note: The book says it's for listener's 12-17, but I think it's worth mentioning that it contains some fairly strong language. I'm probably just a relic from the past and kids probably hear way worse things on the school bus, but for those who still like to know such things, there it is.

Summary: Can't say how I'd feel if I read each page, but hearing the story on CD was a lovely experience. The story's excellent.
Posted by Julie Gilbert's PA at 8:00 AM