Snowflake has a whole new meaning in Hawaii. The new designer drug being trafficked through Oahu gives users the perfect high--and slowly kills them.

In Honolulu, where the palm trees are strung with lights for the holidays, FBI Special Agents Vanessa Storm and Ken Yamada have their hands full trying to stop this deadly flow. Faulty intel brings the agents into a deadly firefight, which yields even more puzzles.

How do the drug lords change their smuggling routes and methods with every single shipment? Vanessa's handsome, charming, and untrustworthy ex-boyfriend might have the answer. 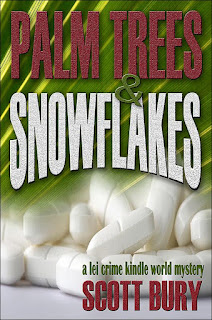 After getting a search warrant for the shipping container, they arrived before noon at 277 Pier, another lot of crumbling asphalt crowded with stacked shipping containers. Yamada brought the car up quietly and slowly to the pier entrance. They got out of the car and strolled along the containers, looking for the right number.

“This is it—” The distinctive sound of smashing glass interrupted Vanessa.

Peter Ferreira stood beside their car, holding a crowbar in one hand and an automatic pistol in the other. He was panting, covered in sweat, shifting his weight from one foot to the other.

Vanessa and Ken followed their training. Hands raised, they moved away from each other. Ferreira was sweating. The crowbar shook in his hand and his eyes darted between Vanessa to Yamada. The gun trembled, not pointed at anything in particular.

“You don’t want to do this, Peter,” Vanessa said. She walked slowly along an arc that curved farther from Yamada but closer to Peter Ferreira’s side.

Yamada distracted him. “She’s right, Peter. We do not have any evidence that implicates you. I did not see you at 9 Pier that night. Your father is out on bail. If you cooperate with us, you could help him to stay out of prison.”

“We’re way past that!” he yelled. “Rogers wants that laptop back.”

Rogers? That was a name in one of the files. Someone named Rogers is a link in this chain.

“We can protect you against Rogers,” Yamada continued as Vanessa edged closer to Peter Ferreira. “You could help put him in prison, where he could never endanger you or your family again.”

“Shut up!” Peter shouted, spit flying from his lips. “You don’t know who you’re talking about.”

“Help us stop Rogers, Peter,” Yamada went on. “Snowflake is killing young people. Honolulu is its main entry point to the U.S. You can help us stop this calamity, Peter.”

When Peter looked at Yamada, Vanessa pounced. With her hands on either side of Ferreira’s gun, she twisted until it clattered to the ground. She continued to twist his arm behind his back. He cried out as Vanessa pushed him to his knees.

Vanessa had her Walther PPK at Ferreira’s head before he could look up again. Yamada picked up the fallen gun and inspected the chamber. “A cheap Glock. Not even loaded,” he said. He snorted softly.

Vanessa cuffed Ferreira while Yamada speed-dialed dispatch. Leaving her partner to wait for HPD, Vanessa looked at the shipping container. Like the one on 9 Pier, a digital combination lock secured it.

Vanessa tried 22-12, the date the container had arrived, and was not surprised when the lock popped open. Shining her flashlight, she stepped inside as sirens approached.
Posted by Unknown at 11:01 AM