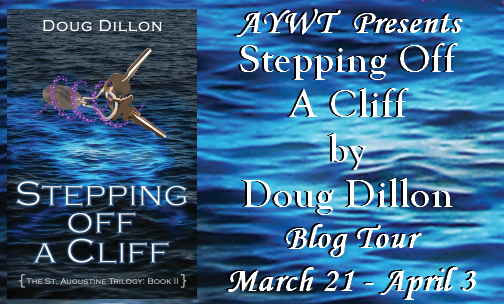 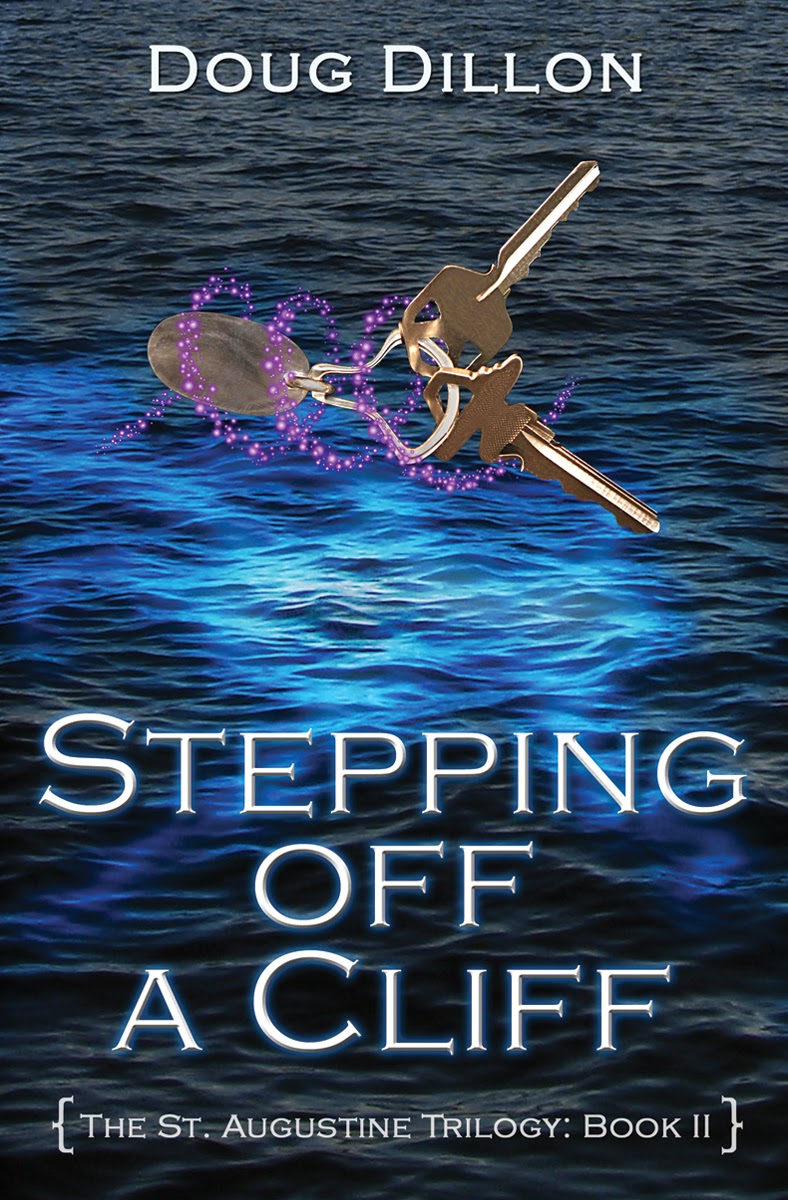 An otherworldly, evil and dangerous force infests America’s oldest and most haunted city, St. Augustine, Florida. Everyone living there, or visiting, is at risk in ways too horrible to imagine.

Standing between this invader and the people of St. Augustine are teenagers Jeff and Carla, the mysterious Native American shaman, Lobo, and Lyle, the homeless guy.

In their quest to save themselves and all the inhabitants of this ancient Florida city, Jeff and Carla uncover lost parts of St. Augustine history, push past the limits of space and time, and come face-to-face with what they come to realize are the true walking dead.

Doug: Thanks for letting me come over so we could talk for a while.
Lobo: Skip the happy talk. Why are you here? Being the author of The St. Augustine Trilogy doesn’t give you the right to barge into my world any time you like.

Doug: Of course not. I won’t take up much of your time.
Lobo: Oh, I’ll make sure of that. So get on with it.

Doug: Sure. You see, I’m starting to write Book III of the trilogy and I want to ask you some questions about St. Augustine.
Lobo: You need to be a lot more specific than that.

Doug: Absolutely. What I want to know is why St. Augustine is such a well-known center for paranormal activity. I mean not just in my novels but in the real world as well.
Lobo: Are you saying this world of mine isn’t real? Don’t you know that once you as an author create a work of fiction it actually exists in a parallel realm?

Doug: Uh, well, I thought that might be a possibility but I wasn’t really sure.
Lobo: Not sure? You’re sitting on my porch here in St. Augustine but you’re not convinced what you see here truly exists?

Doug: What I meant was . . .
Lobo: What you meant was that you really don’t know what you’re talking about. Jeff tried to explain this to you in a recent interview you did with him but obviously his words didn’t sink into your brain.

Doug: Oh, that.
Lobo: Yes, that! What you still fail to grasp is that the creation of plots and characters definitely establishes new worlds that exist side-by-side with your own.

Doug: So even though I think I’m just imagining this interview and writing it down, it is actually taking place in a different reality?
Lobo: Well what do you know? The knucklehead author gets enlightened by one of his characters.

Doug: Uh, well this sure isn’t what I expected when I decided to create your interview.
Lobo: Listen carefully, Doug. Your constant association with St. Augustine and the writing you do about paranormal activities in this city is what helps to give vivid life to me and the other characters in your novels as well as your imagined version of St. Augustine.
This city, whether it’s in your world or mine, is one of those rare places on earth where multiple realities intersect. You sense some of that but you have not yet fully recognized the part you play in all that when you write your novels.

Doug: Oh.
Lobo: Oh? Brilliant response. This interview is at an end. Come back when my words have penetrated that thick skull of yours at a level where we can really talk in depth. You’re nowhere near that point. Now get off my property.

Doug: Right. Will do. Thanks for your time.
Lobo: (No response)

I received this book for free in exchange for my honest opinion. I will attempt to keep this fairly spoiler free.

Premise: Jeff Golden and his friend, Carla, turn to Lobo to get help for Jeff's headaches. They find themselves caught in a world where the past comes to life in unique ways.

The Annoying
The narrator has a really awful habit of saying things like "Don't ask me why" - a lot. A few times is understandable but hardly a chapter goes by without him thinking something to that effect. I wanted to reach in and say, "Nobody asked you anything, fool, move this narrative along." If having the narrator talk to you doesn't bother you, then you'll probably just fine with the book. I like teenagers but I don't want to be trapped in the head of one, which is essentially what the author strives to do. (It's done reasonably well, but as a narrator, Mr. Jeff addresses the reader WAY too much. Did I mention he talks to you? Yeah, see how annoying that can be?) If it were done only in the beginning as a sign that the narrator's finding himself, fine but this happens 97% of the book - and the last 3% are author notes.)

Pacing was painful and slow - I'm not a history buff and while some descriptions of items such as coins were neat and obviously well done, getting there was arduous. I was reading on a kindle and it literally took 30 ish% of the book before Jeff and Carla even got into their quest conversation with Lobo. It took until about 70% before Jeff stops "fighting the problem" which lead to a lot of early conversations that traveled this basic path: Lobo - you should... Jeff - Why? Carla - listen to Lobo. Jeff - Why?

A few places in both dialogue and description I felt the narrator slip away and sound like a middle age guy.

The Good pts I'm neutral on...
It's a unique and awesome way to describe history. I'd acutally never heard of St. Augustine before hearing of the book, but it seems like the perfect setting for such a book.

The descriptions are very thorough. While that made the climax and battle scene awesome it slowed down everything else.
Dialogue is for the most part pretty authentic.

I'm not overly fond of time travel books because I think few ever explain it well. This one doesn't bother trying to explain the whys and wherefores of time travel which is fitting and a good choice on the author's part.

It ends well. From about 80-94% on the kindle (battle) the book was exciting and quick moving, exactly what you want from a book. Ending a book well is a key point in one's overall impression because it's the last word.

Would I read a sequel? Probably. That's where a good ending comes in handy. It leaves one feeling like there's hope for sequels. There was a tremendous amount of setup, some necessary and some not, but hopefully, book 2 will skip all that and get to the good stuff quicker.
Would I buy a boxed set if it was ever available? No.
Would I recommend it to kids who like history? Yes.
Would I recommend it to people who like only historical fiction? Maybe. They might find the paranormal bits too annoying.
Would I recommend it to people who like only paranormal? Probably not, you've got to have some part of you that appreciates history. Those heavy handed historical descriptions would likely bore you.
Is it kid-safe? To a degree. There are some curse words, but probably no more than they've heard in their first grade class.

Conclusion: If the things that annoy me don't bother you and you do like history and paranormal stories, this might be a totally awesome read for you. To me, it was okay. I enjoyed the battle at the end. It's a series that starts slow but shows some real promise in the end.

*** I received a free copy in exchange for an honest opinion. I will attempt to keep it spoiler free ***

Things that didn't resonate with me: (odd things sometimes bother me, so take what I say with that in mind.)
- PB - Particle Being was too clunky a term for me and PB made me think peanut butter.
- plot pacing - a good chunk of the book seemed to follow the pattern "explain things to Jeff", have something happen, "explain things to Jeff", rinse and repeat. This changed near the end, but it slowed things down.
- Lyle - has the potential to be a neat character but he added zilch in terms of moving the plot forward.
- Carla - I wish she was more important to the plot. She's got some super awesome gifts but they're seriously glossed over.
- Jeff as a narrator - still breaks the 4th wall too often. The story would be much quicker if the kid just stopped talking to the reader and told the story.
- missing emotions - I'm not going to mention the situations b/c that would probably be a plot spoiler, but several really devastating events were skimmed over with little to no emotional impact.

Good:
- Jeff become more important and does some things on his own this time around.
- The history inclusion, though slightly less this time, seemed cooler.
- The time travel aspect was well-integrated.
- Lobo = the man; his power and wisdom approaches the unbelievable, but he's still pretty amazing. Ironically, the more incredible his powers became, the more believable he became as a character. Maybe it's just because there seemed to be backing for the previous hype.

Conclusion: If you enjoyed the first book, there's no reason for you not to like the second book in the trilogy. The history is nicely integrated with the story. There's more action than the first book, which is a step in the right direction. If you haven't read book one, that might be helpful before jumping into this story. Jeff, Carla, and Lobo face new supernatural dangers in this YA, paranormal tale.

About the Author
A former award-winning educator, Doug writes about things paranormal and historical. His interest in the paranormal comes from personal experiences as detailed in the nonfiction adult book he and wife wrote titled, AN EXPLOSION OF BEING: AN AMERICAN FAMILY'S JOURNEY INTO THE PSYCHIC. Out of those events and extensive historical research, he created SLIDING BENEATH THE SURFACE for young adults, Book I of the St. Augustine Trilogy. Doug set his trilogy in the oldest and most haunted city in the United States, St. Augustine, Florida not only for those reasons, but also because it's his favorite place to visit. Books II and III of the trilogy are on the way. 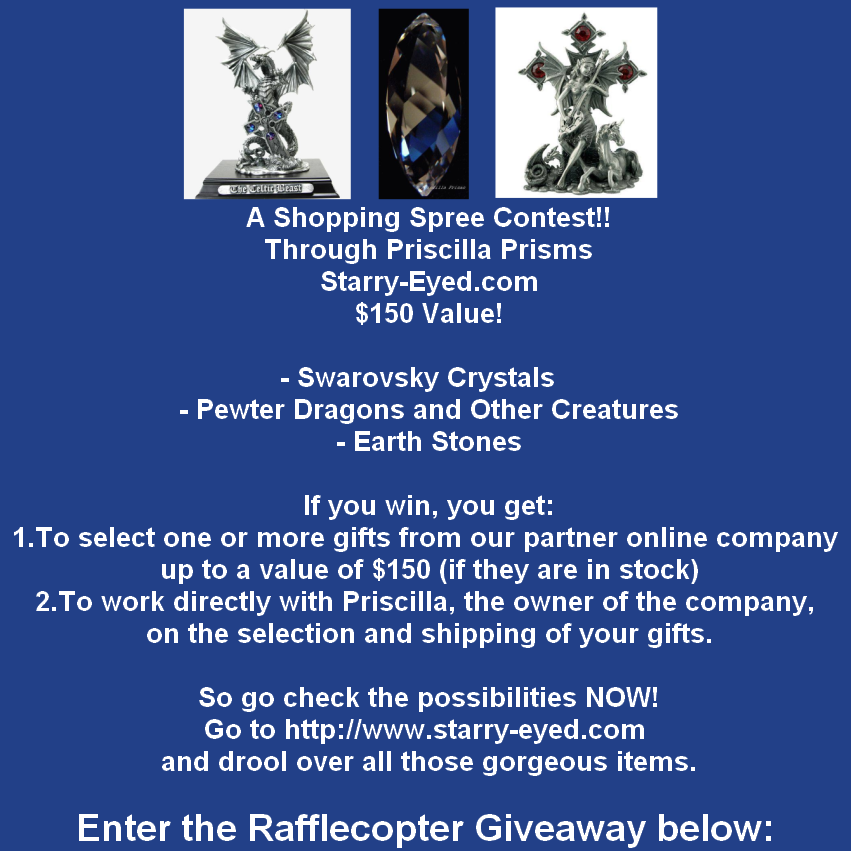