Review | The Princes of the Golden Cage by @NathalieMallet 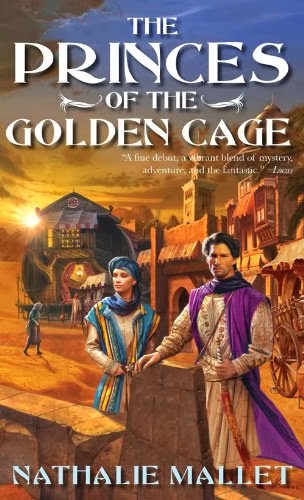 Prince Amir lives in a lavish and beautiful cage. He lives in a palace with hundreds of his brothers, all barred by law from ever leaving the palace until he, or one of his brothers, becomes the next Sultan. Living under constant threat of death at the hands of his scheming brothers, Amir has chosen a life of solitude and study. His scholarly and alchemical pursuits bring him under suspicion when his brothers begin to die from seemingly supernatural means. Amir finds himself thrown together with his brother Erik, the son of a barbarian princess. Together they must discover the dark secret that is stalking the halls of their golden cage.

Overall, I enjoyed this quick read. It's classic mystery done well with a fantasy/ horror flare. The main character can get annoying and sometimes he definitely sounds like a sulky little girl, but the action is fairly well done and the plot twists are nicely executed. I agree with whoever just said that the characters are at times unnecessarily obtuse. I would have more bluntly put it: I hate when characters are just plain dumb.

There's hardly any characterization, but that's fine because the emphasis is mainly on the mystery. The author has a pretty smooth writing style. I'd be interested to know how middle-eastern readers would take this book, as it often strikes me as if it were written by a "western" woman who loved the culture but couldn't quite master how to capture it.

I'll probably read the sequel, but I hope they really put some effort into really editing that book. There are nearly a dozen simple grammatical errors and one continuity error, which strike me more as a self-published book bane than a professionally published work.

Here are some of the mistakes:
15 a flawless profile I was proud to bare.
17 "You don't mean with our scholarly brother, Amir!" (note: Amir was not the one being addressed here; this sentence is just plain odd. For the context it was going for, it would have been better suited to say: "You don't mean with our scholarly brother, Amir, do you?")
32 Hassan became silent and his attention turned ton his hands,...
37 "Before going any further, tell me your name," I asked,... (Note: There's no question here.)
78 lack there of
179 Another clue of its recent use was the unpleasant smell of brunt flesh lingering in the air.
217 I thought, my mistake "Shh," I made.
226 ... the blade sliced through the dark demon repetitively, sending puffs of smoke and a sulfuric smell in the air instead of blood. (Note: word choice... repeatedly might be better)
228 Rami walked strait to me.
252 ... baring the same name...
257 one can not steal what isn't there. (Note: this is an acceptable form of the word just not used that often.)
280 the venom in Mir's words was hard to bare.
283 By wearing loose clothing and spending most of my term locked inwith her, we thought I might hide my pregnancy.
290 While Mira and I will contend ourselves with watching you from a balcony with Salima.
(excerpt from next book) 312 ... was made of Telfarian steal, hence too good a quality...