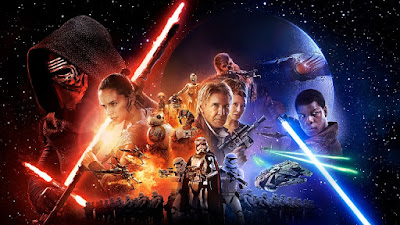 Disclaimer: I rarely write complaining blog posts, but this series of events was darkly amusing.

Confession: I’ve never seen a movie 7 times in the theaters before, so this is an all new experience anyway.

Conclusion: Star Wars: The Force Awakens is an excellent movie, but perhaps I should have quit while I was ahead.

Explanation: The theater experience left several things to be desired.

1) I don’t think they bothered turning on the heat for the 12 of us in the theater. I don’t actually blame them for that part though because it’s probably very expensive to heat a large cavernous space like that.

2) 10 minutes into the start of the actual movie, a family of 3 comes in and takes a seat directly in the row in front of me. Of course, the father—a pretty big dude—sits directly in front of me so that his head is now front and center of my view. There are like 100 empty seats all over this theater, mind you.

3) Okay, so no problem, get up and move, right? Yeah, well, about that … I move to get up just as the guy sits back to relax. Problem – this theater has reclining seats that move back about six inches, so my head meets this guy’s chair. Result – headache. Solution – Advil which I haul around with me for such random occurrences.

4) I move over two seats, and wind up in front of a man who ends up kicking my chair every half-hour. Fine, whatever.

5) Two seconds later, one of the kids’ phones lights up. To add to the fun, the kid must be texting because for a time the phone does that happy pinging noise of a received message. I know they missed the beginning courtesy statement about not keeping your phone on because the lights are distracting, but geez, have they never been to a movie ever? And I’m pretty sure it takes about a quarter second to turn the ringer off. If you’re staring at the dang thing, you don’t need the notification ping.

6) About ¾ through the movie, during a slow, sentimental moment the phone finally goes off, but then the kid starts yammering. “I love Star Wars. Star Wars is awesome.” Father – “Shut up.” Kid – repetition of similar statements for about 5 minutes straight. Me (*thinks*) – I would be more ticked off if this were my first time seeing the movie. Turn your phone back on. (It’s amazing what you can consider the lesser of two evils when it comes to movie annoyances. Phone light and noise vs kid shouting = phone wins for less annoying.)

Life Conclusion: You can’t control all the crazy in the world. And perhaps I need to see the movie and 8th time just to reclaim the good viewing experience :-).

Closing Comments: If you haven’t seen Star Wars Ep VII: The Force Awakens, go check it out. Odds are good that your theater experience will be better than mine. 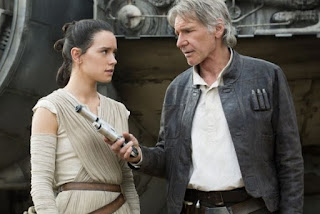 Favorite Moments and Quotes this Round (and a few Questions):

- Rey sledding down the sand is still one of my favorite moments.

- BB-8 falling on Finn when they all try to hide. I also find it funny that they left the poor droid in that hole. He had to use his grappling hooks to escape.

- Rey flying the Millennium Falcon during their escape.

- Rey running away from Kylo Ren the first time before she’s captured. She grows increasingly frustrated as she fires about 10 shots at him.

- The end of the Rey/Kylo Ren duel.

- How come the Resistance doesn’t have more of a scrap with the First Order near Maz’s temple. Leia’s ship arrives about 3 seconds after Kylo Ren’s takes off. They’d probably be in the same airspace for a moment.

- Does Poe’s first X-wing fighter have a self-destruct mechanism? It kind of blows up easily.

- How did Rey get her small gun back? Or is the one she’s wearing at the end of the movie just the same model as the one Han gives her earlier?