Blurb
An epic, highly acclaimed fantasy that has just been optioned as a feature film by Fox 2000!


The Icemark is a kingdom in grave danger. Its king has been killed in battle, its enemy lies in wait, and its fate rests on the shoulders of one girl. Thirrin Freer Strong-in-the-Arm Lindenshield, a beautiful princess and an intrepid warrior, must find a way to protect her land from a terrible invasion. She will forge an extraordinary alliance of noble Snow Leopards, ancient Vampires, and ferocious Wolf-folk. She will find unexpected strength in her friendship with a young warlock. And she will lead her allies to victory with her fierce battle cry: "Blood! Blast! And Fire!"
The Cry of the Icemark
Buy on Amazon
Add on Goodreads

Blurb
Following THE CRY OF THE ICEMARK, a huge success in England and critically acclaimed in the U.S., the next epic adventure in The Icemark Chronicles.

Many years have passed since Queen Thirrin and her allies defended the Icemark against a brutal invasion. But now General Bellorum is back, along with his bloodthirsty spawn--twin sons even more vicious than him. Thirrin and Oskan also have a family: two girls and three boys. But darkness lurks within the House of Lindenshield: Medea, the couple's cold-hearted fifteen-year-old daughter, is just coming into her magical powers, and she may be the downfall of the kingdom. It's up to her brother, Charlemagne, crippled by polio as a child, to return from exile and rescue the land he loves.

Blade of Fire
Buy on Amazon
Add on Goodreads

Blurb
Allied with Cronus, the embodiment of all evil, Medea has raised an army of the undead to invade her family's kingdom. Now in paperback, the thrilling conclusion to the acclaimed ICEMARK trilogy!

Oskan and Thirrin thought their bad-seed daughter was gone for good -- burnt to a cinder and cast out onto the Spirit Plain. But banishment did not kill Medea: It made her stronger. Now, allied with Cronus, embodiment of all evil, the young sorceress is plotting revenge. Queen Thirrin is distracted by a new invader whose troops ride huge triceratops-like beasts into battle. But the warlock Oskan realizes the true threat to the kingdom is the demon army assembled by his daughter. To ensure the Icemark's eternal safety, he knows he must destroy her soul--even at the risk of his own.

Last Battle of the Icemark
Buy on Amazon
Add on Goodreads 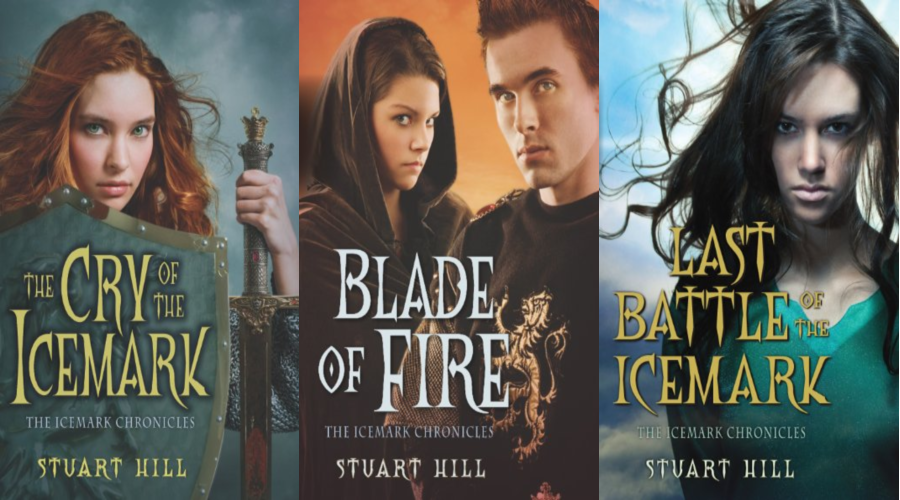