Part of seeing The Force Awakens a ridiculous amount of times has been the adventure of checking out new theaters. I used to see it in tiny theaters very close to my apartment, but as time goes on, the only places that still have it are those that keep a ton of movies for a long time. This time, I stopped at the AMC at the Garden State Plaza on a Tues mid-afternoon. 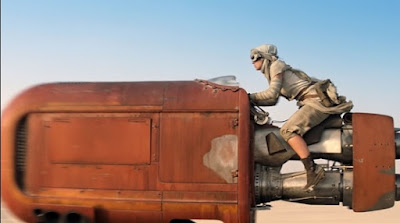 I nearly got run over in the parking lot.

Not kidding about that, unfortunately. You'd think we were pod racing. It was raining and parking spaces in the deck were hard to come by. Mind you, there were spaces, just outside under the pouring rain. I found one and put my blinker on to indicate that I'd take it as soon as the person pulled out. And the idiot in front of me backed up. I beeped, checked the mirror, and reversed in time to avoid a collision. I didn't have much time to think, but thankfully, I had enough sense to move my car out of the way before the fool hit me. Try explaining that to a cop, "yes, it looks like I hit him from behind but he really backed into me because he couldn't stand the thought of walking twenty feet in the rain."

Doesn't exactly give one the warm fuzzies when thinking about the state of humanity. It's a parking spot, people, there's no reason to come across as a complete nincompoop. I know drivers in NJ have a reputation to keep, but yikes ...

Can I just say I am blown away by how many people are still watching this movie?

I tried to count discretely, but I lost count somewhere mid-sixties today. Granted, the theater was nowhere near full, but for a Tues in the middle of the day with a movie that's been out since Dec 18th, that's quite impressive. 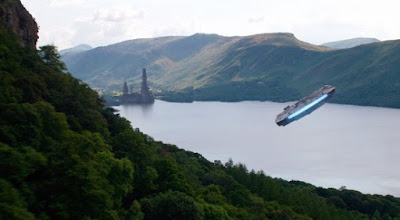 And yes, I still noticed new things. I think I miscounted the times Finn gets knocked off his feet. On Jakku alone I think the number's near 4-5. Would be fun to see how many lines I actually remember at this point, but I'm sure the script's already floating around the internet somewhere. There are only two-three highly convenient points that are hard to explain. 1. How Finn knows Rey's going to be taken to the Starkiller Base. 2. How Rey knows where to find Finn after the duel with Kylo Ren. The woman must have a killer instincts in tracking, which is possible given her job as a scavenger. 3. How Chewie finds Rey and Finn. Timing's not always clear in the movie, but it still flows very nicely. I love some of the transitions. A lot of the scenery is downright gorgeous.