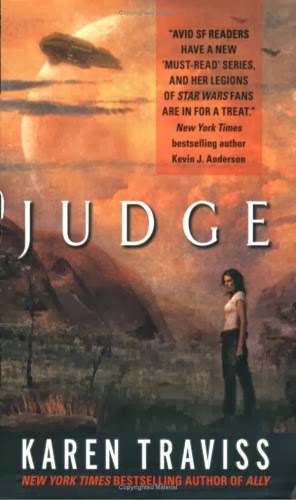 
The Eqbas have come, bringing justice, change, hope to some . . . and death to many.

Seeking to punish the human gethes who caused the near destruction of an ocean-dwelling race in the distant Cavanagh’s Star system, the Eqbas have finally landed on Earth. But another, equally important obligation has drawn them across the galaxy: the salvation of this environmentally ravaged world, a mission that could entail the annihilation of billions of humans.

Former police officer Shan Frankland has come as well—along with her two lifemates, one alien and one human—carrying in her blood the parasite that makes her virtually immortal. Though she once vowed never to let the powerful contagion reach the homeworld she left nearly a century ago, she feels compelled to play an active role in the unfolding drama—and to follow the catastrophic events that have devastated civilizations and defined her life to their shocking, inevitable end.

The book's probably more about internal conflicts than anything else. It's definitely one big, long conclusion. I can't remember much about Ally, but I view that as the climax and this the wrap-up for the whole thing.

SPOILER ALERT:
Shap succeeds in removing the parasite, so Shan, Aras, and Ade all have a moral choice to make: To be mortal, or not to be mortal.

Not everyone on the brink of death gets the choice to join or not join the semi-immortal, but Eddie does.

Meanwhile, Earth's getting an ecological makeover. If you haven't followed the series so far, I don't think this book will have much meaning for you.

Karen Traviss has created a believable universe in all it's broken, dirty glory. The book would make an excellent read for a philosophy class, if you're into that sort of thing.