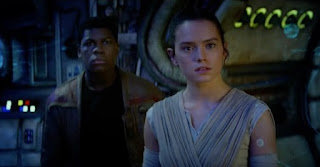 *It should probably go without saying, but this is definitely gonna have spoilers.*

Poe Dameron: “It’s very hard to understand you with all the apparatus.”

2 Rey sledding down a sand dune.

4 Snoke: “There has been an awakening. Have you felt it?”

5 Han gives Rey a blaster. She tells him “I think I can handle myself.” Han says, “I know, that’s why I’m giving it to you.”

6 Rey’s abduction – there’s a scene they put in the trailer where she’s frozen with the Force and staring down in horror at Kylo Ren’s lightsaber which is about 3 inches from her face.

Han: "That's not how the Force works!"

Stormtrooper: “And I’ll drop your weapon.”

9 After Kylo Ren finds Rey has escaped he’s busy hacking away at the interrogation chair. Two Stormtroopers are approaching, hear the ruckus and promptly turn around.