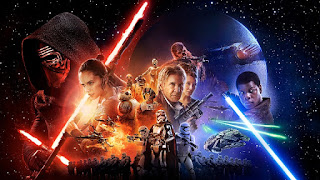 For my 6th viewing, I finally saw it in 2d. The only one I’ll be skipping is imax because I’m pretty sure that would make me nauseous.

As always, I don't own the pics. I found 'em online.

-During Rey’s visions, she hears Yoda or Obi-Wan (I think) talking about how the force surrounds everything and binds everything together. I’m paraphrasing because I only noticed it this time around and it’s almost lost beneath the sound of pounding rain. Obi-Wan definitely calls her name.

-Rey’s visions, which are cool in and of themselves, seem to encompass both the past and the near future. One scene is of Kylo Ren lighting his lightsaber and showing up in snow-covered woods.

- I still couldn’t tell where the first hallway of her vision is from. Had to look it up on the internet.

- Rey sees Luke’s mechanical hand touching R2D2. Did anybody notice that R2 wakes up when Rey gets to the resistance base?

- When Rey’s climbing the Jedi stairs she has the gun Han gave her in a holster.

- That girl is gonna get a very weird tan. She doesn’t seem to believe in covering about a 2 inch part of her upper arms. While very cool for costumes, odd for tanning, esp on a place like Jakku.

- How many times did Daisy Ridley have to climb those darn stairs to get those shots? That is a lot of stairs.

- How does Hux get Kylo Ren off the planet before it explodes? The place is falling apart while he’s frantically asking the Supreme Leader what he should do. Soon after Poe says he’s got eyes on them, they fly away and the planet goes kaboom.

- How did Rey find her way back to Finn’s fallen form after running all over the woods fighting Kylo Ren? (good sense of direction from being a scavenger??)

- How did Chewie find Rey and Finn? (Follow the lightsaber duel??)

- How did Maz Kanata get ahold of Luke’s/Anakin’s blue lightsaber?

- Why is the New Republic confined to 1 system?

- What’d Finn do with the blaster Han gave him? Did he set it down when he was going to run away to the Outer Rim?

- How did Kylo Ren end up with his grandfather’s mask? These should make some really interesting Expanded Universe stories.

- Has Rey used mind tricks before to survive?

More Favorite Moments and Quotes: (I’d really need a list of like 50 things to catch everything. Overall, this movie has a great sense of comedic timing.)

2) Hapless First order officer getting Force pulled across to Kylo Ren’s hand. His shoes skip along the ground with the pull.

3) Rey climbing inside part of the Starkiller base. (She initially climbs down to avoid being seen by First Order Stormtroopers, but then she notices a place to crawl into.)

4) Han pointing with his chin while Finn’s trying to explain his grand plan. Finn’s outrage at being ignored then his look of joy when he see’s Rey scaling the side of base.

8) Rey trying to talk sense into BB-8 about not following her as she runs away from Maz’s temple cantina thing. Then the First Order shows up and her first instinct is to run back to see what’s up.

9) Poe Dameron blasting like 10 Tie Fighters in a row. Finn said it best “That’s one hell of a pilot!”

Rey: “Yeah. You pull the trigger.”

Han: “It’s a little more complicated than that.”

11) Kylo Ren apologizing to his grandfather’s mask about feeling called to the Light.

Finn: “I’m talking to myself.”

13) Finn and Poe’s escape – when they get caught on the fuel hose or whatever that is. 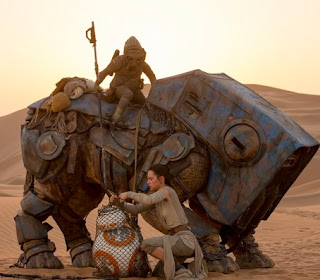