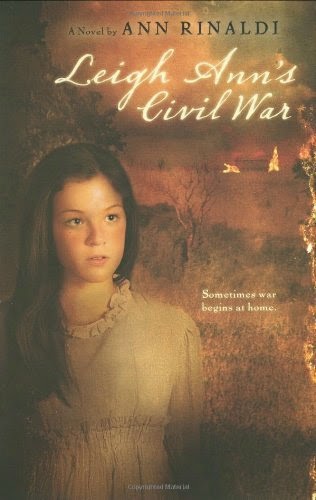 
Leigh Ann Conners is spunky and determined. Although she often finds herself in trouble, she loves her two older brothers dearly and would do anything to make them proud.When the Yankees arrive in Roswell, Georgia, Leigh Ann places a French flag upon the family’s mill. She hopes the Yankees will then spare the mill from destruction, but her actions have disastrous results. Sent north with the women and children who worked in the mill—all branded traitors for making fabric for Confederate uniforms—Leigh Ann embarks on a journey that requires her to find her own inner strength. Only then will she be able to rise above the war raging around her.

It's just not that interesting.

I liked the general premise to tell a Civil War story from a child's point of view, but it never moved beyond that. A lot of minor things about the story bothered me: it's downright boring in a lot of places and then *wham* the kid get beat on or kidnapped or something; the cover character is cute but looks nothing like the story character (self-described in the text); the book is just plain unrealistic in a lot of instances - summary of one pt: main character just can't bring herself to strangle the chickens like the evil Yankee guy wants and out comes the owl to swoop to her rescue.

The protagonist was all right, but I just couldn't like her. She wasn't overly cute, or lovable, or smart, or anything. I guess normal is all right, but it just seemed like the story wanted to be great the whole way through and just never got there.