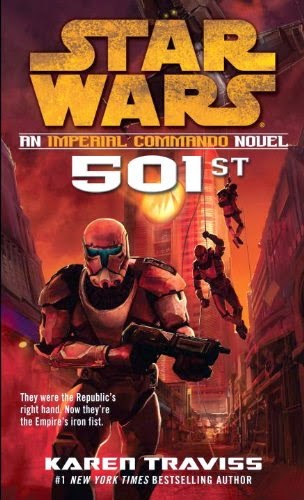 
The Clone Wars are over, but for those with reason to run from the new galactic Empire, the battle to survive has only just begun. . . .

The Jedi have been decimated in the Great Purge, and the Republic has fallen. Now the former Republic Commandos–the galaxy’s finest special forces troops, cloned from Jango Fett–find themselves on opposing sides and in very different armor. Some have deserted and fled to Mandalore with the mercenaries, renegade clone troopers, and rogue Jedi who make up Kal Skirata’ s ragtag resistance to Imperial occupation. Others–including men from Delta and Omega squads–now serve as Imperial Commandos, a black ops unit within Vader’s own 501st Legion, tasked to hunt down fugitive Jedi and clone deserters. For Darman, grieving for his Jedi wife and separated from his son, it’s an agonizing test of loyalty. But he’s not the only one who’ll be forced to test the ties of brotherhood. On Mandalore, clone deserters and the planet’s own natives, who have no love for the Jedi, will have their most cherished beliefs challenged. In the savage new galactic order, old feuds may have to be set aside to unite against a far bigger threat, and nobody can take old loyalties for granted.


*spoiler alert*
501st is one of the better of the recent Star Wars books, but that's not really saying much because the competition is fairly pathetic of late. The RC books were great. This book tries to fly on the coattails of that greatness and sort of falls off into navel-gazing drivel from time to time. Certain sections were like reading fictionalized philosophy. Is it right to harbor some Jedi?

Darman often comes off like a complete jerk and an idiot to boot, which is totally uncool because thus far he's been the level-headed one. I understand that the events of the previous book were very rough for him, but the complete turn around just annoys me. I don't really buy the all-Jedi-must-die-to-protect-Kad attitude. Where does a man drowning in grief make so many leaps of logic? Kad's half-Jedi. --> Even though Order 66 went down and all the Jedi are scattered and running for their lives, they must be coming after Kad to recruit him into a baby Jedi. --> I like my job of killing Jedi; I must kill Jedi to protect my son b/c having a son changes things, don't you know? --> Even though my brothers want to rescue me, I must stay here and kill Jedi

That said, Niner's standing out more as the hero. The Skirata Enclave should be all finished their moral wrestling, hopefully the next book will have some forward-moving plot. Altis is back. He seems like an interesting guy. We've only seen him briefly in No Prisoners thus far, and his role here was merely cameo... Still, there's promise of more of him and his bunch later. Darman and Altis's people are certainly on a collision course.