Review | On the Line by Daniel Paisner 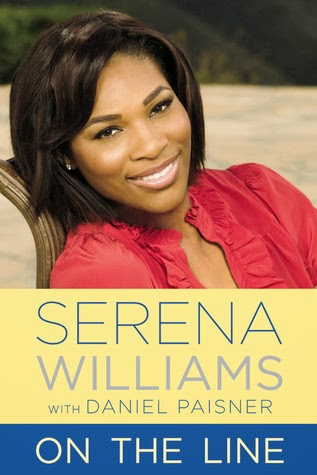 
One of the biggest stars in tennis, Serena Williams has captured every major title. Her 2009 Australia Open championship earned her the #1 world ranking for the third time in her illustrious career - and marked only the latest exclamation point on a life well and purposefully lived. As a young girl, Serena began training with an adult-sized racquet that was almost as big as her. Rather than dropping the racquet, Serena saw it as a challenge to overcome-and she has confronted every obstacle on her path to success with the same unflagging spirit. From growing up in the tough, hardscrabble neighborhood of Compton, California, to being trained by her father on public tennis courts littered with broken glass and drug paraphernalia, to becoming the top women's player in the world, Serena has proven to be an inspiration to her legions of fans both young and old. Her accomplishments have not been without struggle: being derailed by injury, devastated by the tragic shooting of her older sister, and criticized for her unorthodox approach to tennis. Yet somehow, Serena always manages to prevail. Both on the court and off, she's applied the strength and determination that helped her to become a champion to successful pursuits in philanthropy, fashion, television and film. In this compelling and poignant memoir, Serena takes an empowering look at her extraordinary life and what is still to come.

I'm hands down not a fan of nonfiction books, but she's famous and I thought I'd give it a go. I'm about half way through and struggling to finish, but that's really only because of it being a nonfiction book. I usually struggle to finish. It would help if I understood a lot of the tennis references, but I'm not a tennis fan, so my knowledge of even little things like the scoring method is next to nil.

It's decently written, and I think it'll give her fans a nice intro to her life. However, so far, everything you read sounds like something you could get from piecing together the various newspaper articles written about her. I don't see a great deal of details that are deep and personal. I mean she talks about the horrible day where she was jeered at because her sister was injured and had to back out of a match a lot of people were hoping to see, but the whole section comes out like a journal ranting session rather than an objective analysis of what happened or an emotion-filled reaction. She talks a bit about being a Jehovah's Witnesses but doesn't go into their belief system. I get that this would be the right place to go all out into what JW's believe, but leaving it at the broad generalization "we're all Christians" just kind of let me down.

I will finish the book, I think it's a worthwhile read with some interesting insights. I probably wouldn't have bought the book if not for the amazon vine program though, so my recommendation would be to ask your local library to buy the book if you want to read up on Serena Williams.