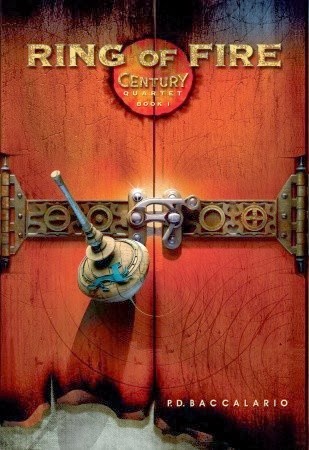 Every hundred years, four kids from four cities must save the world.

A mix-up with their reservations forces Harvey from New York, Mistral from Paris, and Sheng from Shanghai to share a room with the hotel owner’s daughter, Elettra. The four kids discover an amazing coincidence—they all have birthdays on February 29, Leap Day. That night, a strange man gives them a briefcase and asks them to take care of it until he returns. Soon afterward, the man is murdered.

The kids open the briefcase. In it they find a series of clues that take them all over Rome, through dusty libraries and dark catacombs, in search of the elusive Ring of Fire, an ancient object so powerful that legend says even a Roman emperor couldn’t control it.

In the first book of the Century quartet, Italian author P. D. Baccalario begins a mystery that will take four cities and four extraordinary kids to solve.

- From the Hardcover edition.

Interesting cover, decent concept, but awkward, very much so. I wonder how people reading it in Italian feel about the writing, but this version is as stiff as a board. The dialogue is so dull I might be tempted to read a calculus book over this.

I really can't fathom how a reputable publisher like Random House let out something this shoddy. Then, they have the gall to try to get $16.99 for it. Go make your local library buy it if you must read it, but do yourself a favor and go grab a Harry Potter book or something with half-way decent writing.

Every character sounded the same, be they young, old, male, or female. The exception might be the aunts, who sounded similar to each other. The whole mysterious society type appeal fell flat on its face around page 3.

I did slog through it, but I don't think I really gained anything from it. Mostly, I was just bored through the process.