Second Huntsman Movie Better than the First (Despite Critic Hate) 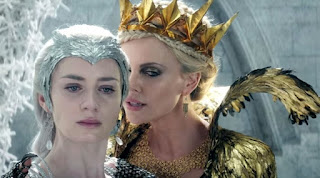 Rating: 3.5/5 stars, maybe even 4 if I’m feeling generous and not currently letting negative bias affect my judgment. (I’m going with amazon like ratings because that’s what I’m used to.)

Summary: It’s all about expectations. Given the absolutely horrific ratings Rotten Tomato gave Huntsman: Winter’s War, I didn’t expect it to be a masterpiece.

- For an all-star cast, the acting’s just all right. Then again, consider that the roles don’t exactly demand an Oscar worthy performance.

- Story (4/5) – This was one complaint I read from critics I don’t agree with. It’s a fairy tale, it’s not meant to make a whole heap of sense. There’s a general plot with simplistic devices. The “twists and turns” can be seen from 9-miles out, but they’re still satisfying, that’s what counts.

- Character Development – Classic case of too much power corrupting. People have done worse things in the name of power in the real world, so it shouldn’t surprise us that the look at the good guys and bad guys isn’t always crystal clear.

- Humor – Some timely things and a few decent lines, but the whole he-dwarf, she-dwarf thing fell on its face.

- Plot (3/5) – Several key pieces of the plot are rather convenient (timely rescues, falling into traps that end up adding to the party, etc) that make one think more of a video game than a movie. It might be slightly lazy writing-wise, but it’s functional. 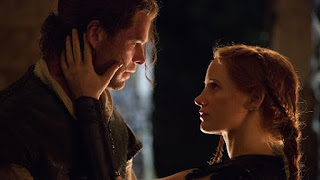 - Casting (4/5 stars) – Charilze Theron and Emily Blunt both do crazy queen pretty well. Jessica Chastain does the action scenes very well. She pulls off the medieval look well. Chris Hemsworth is, of course, the reason half the people are seeing the movie anyway. On the plus side, not much but brief references to Snow White.

- Key question: Was I entertained? Yes. Would I buy the bluray to play on loop or see in the theaters 14 times? No. But I was still entertained for the 2 hrs I paid $6.00 for a movie ticket. Good enough.

Conclusion: I can see why 51% of the audience liked it and 49% didn’t. Keep your expectations realistic and you’ll probably find yourself entertained.