Star Wars The Force Awakens – By the Numbers 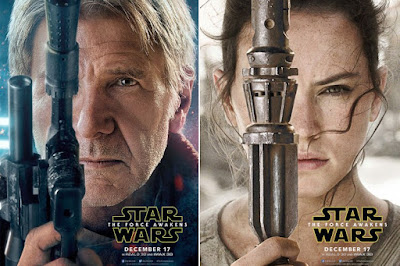 As usual, I found all images on the internet, and I make no claim of owning any of 'em.

I have no idea why I felt compelled to count, but as I saw the movie subsequent times, I found myself keeping track of events by the numbers.

the first time on the Hossnen System – sorry about the spelling; the Falcon cuts a nice swath through another forest while landing on Starkiller Base; planet explodes = bye, bye trees)

10 - # of times I’ve seen it in theaters as of 2/9/16. (Note: That’s largely what I’m basing this off of, so some of the counts might be slightly off. Please feel free to comment with any corrections you noticed. I could have very easily missed something. I’ve only seen it 10 times, mostly at 1 week intervals and a few with some shoddy neighbors using cell phones right in front of me. What is it with people and their dang phones in the movies. Grrr. If you wanna play on the phone do others a favor and skip the movie, just play Candy Crush to your heart’s delight.)

6 (ish) - # of time Rey’s referred to as some version of “the girl” (Unkar Plutt to his thugs telling them to get the droid; First Order officer in his report; Kylo Ren’s reply “What girl?”; Maz to Han “Who’s the girl?”; Kylo Ren to Rey right before he kidnaps her “The girl I’ve heard so much about.”; Han to Chewie “The girl knows her stuff”)

5 (ish) - # of times Finn was knocked off his feet (Tie fighter crash, encounter with Rey’s bo staff, Tie fighter assault on the tent, fight with the Stormtrooper wielding an electrified weapon, fight with Kylo Ren)

4 (ish) - # of Tie fighters Finn destroys (2-ish on the escape – it’s hard to tell how many explode and I’m not sure whether to count the one he was shot down in, 2 on Jakku)

4 (ish) - # of time Rey cries (talking to Maz, as Kylo Ren’s “guest” – when he’s trying to get the map out of her mind; Han’s encounter with a lightsaber; over Finn’s unconscious body)

4 - # of dropships sent to Jakku to retrieve the piece of the star map.

4 - (at least) # of trees cut with lightsaber on the Starkiller base during the duel with Kylo Ren (Kylo hits one while fighting Finn, I think he hits another just into the fight with Rey, and she hits at least two during the duel.) 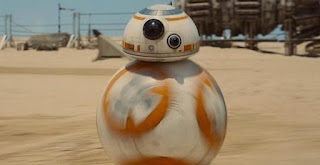 3 - # of times Rey either knocked off her feet or knocked out (once escaping Jakku, KO’d being kidnapped by Kylo Ren, blasted up and into a tree right before Finn fights Kylo Ren)

3 - # of Stormtroopers Poe shoots to free Han, Finn, and Chewie at the battle around Maz’s cantina

3 - # of Stormtroopers Finn kills in the battle around Maz’s cantina (one he runs through with a lightsaber, two he shoots once getting hold of a blaster) 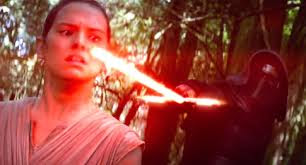 2 - # of times BB-8 had to use his grappling hooks (once during the escape; once when Finn and Rey left him in the smuggling hatch)

2 - # of people BB-8 almost takes out while rolling his way over to reunite with Poe (Finn, random Resistance fighter)

1 - # of blaster bolts Kylo Ren freezes with the Force

1 - # of people who actually believe Finn works for the Resistance (just Rey; BB-8 and Han and probably Chewie are skeptical from the first moment)

- First thing Rey says isn’t in Basic. (She’s essentially yelling at Teedo to get off her turf and turn that droid loose.) “Your antennae’s bent” is her first Basic line.

- BB-8 has the first line of the movie and almost the last. I think R2-D2 gets in a last second beep, though Chewie’s shout to Rey is close.

- Finn claims Chewie almost killed him 6 times. “Which is fine!”

- Han warns Finn that women always find out the truth.