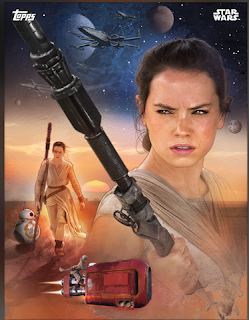 As noted in the title, this brief opinion will definitely contain spoilers for Star Wars Episode VII: The Force Awakens.

Ever since Daisy Ridley gave the desert orphan a face in the movie, people have probably been asking "Who is she?"

And heard most of the theories before reading that article. I think the new one to me was "Kenobi's Daughter."

Of those theories, I'd kinda like it to be the "nobody special" or "Luke's daughter" theory.

If she is Luke's daughter, that would be fine with me, but it does sound cliche. Would make me question his parenting, but whatever. Even if she was sent away to be hidden from the dark side, geez, send a guardian with her. Darn, now I really wanna know who her mother is too. There is a significant look that Luke gives her after she climbs like a thousand stairs and holds that lightsaber out. (Seriously, I'd be like "no more dang stairs." I wonder how many times poor Daisy had to climb the things.)

My personal wild theory is this ...

Rey is a manifestation of the Force.

A lot of Star Wars fans for Ep 4-6 would like to forget that Ep 1-3 ever happened, but in The Phantom Menace, Anakin Skywalker's mother tells Qui Gon Ginn that "There was no father." She goes on to explain: "I carried him, I gave birth ... I can't explain what happened. It was probably just a throwaway line to make Anakin seem more mysterious and make him fit the mold of the Chosen One who will bring balance back to the Force. She could have been lying I suppose, but Shmi didn't strike me as the sort of lady to lie to a Jedi she's trying to have save her son.

So, back to Rey. If the Force manifested itself once in a person, a human boy, it could certainly do it again.

I suppose from a certain point of view, this is a slight variation on the "nobody special" theory, but it would lend a very nice balance the the three trilogies and sort of make me like The Phantom Menace a wee bit more. It would also help explain why her parent(s) abandoned her. In Rey's dreams we get a glimpse of the little girl she was being dropped off on Jakku and screaming for somebody to come back. So we know there is somebody. Later, Maz Kanata (I think, bear with me, people, I've only seen this 3 times as oft his writing) tells her something like "You already know the truth, they're not coming back."

This time around (the third) I did hear what sounded like Kenobi's voice in Rey's dream calling her name. That would lend credence to the idea that she may be a descendant, but it also lends support to my theory of a Force manifestation.

One complaint I read about the movie is that Rey's too powerful, but her being an embodiment of the Force would explain some of it.

In such a wide galaxy and universe full of more galaxies, two manifestations of the Force in human form is within the scope of reason. The movie is called "The Force Awakens." Snoke asks Kylo Ren if he's felt it. In Ep 1, Anakin accidentally blows up the droid control ship. Given the precedent, it's not that far-fetched to believe that Rey can fight well with a lightsaber, having never touched one. She's obviously had a lot of practice with that staff weapon. Being able to pull a mind-trick too is more believable this way. I know a lot of fans get wrapped up in it all being about the Skywalkers/ Solos, but again, it's a big galaxy. The Force binds things together. If it felt evil on the rise, might it not prepare another Chosen one to bring back balance?

That's my theory and I'm sticking to it ... for now. Thanks for listening. Feel free to comment below. 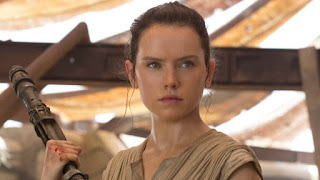